Marco Rubio concedes; ends campaign as Donald Trump overwhelms him in his home state of Florida; Trump 45% to Rubio’s 28% (of the vote). 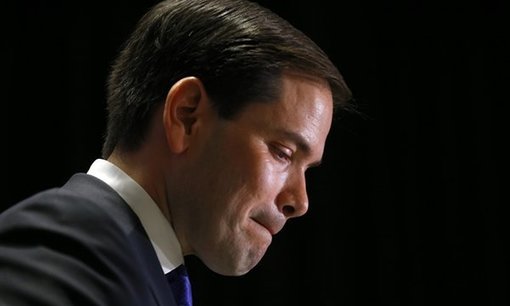 ‘People are angry and people are very frustrated,’ Marco Rubio says, ‘this nation needs a vibrant and growing conservative movement, but one that’s built on principles and on ideas, not on fear, not on anger, not on preying on people’s frustrations;’ a thinly-veiled attack on Donald J. Trump‘s political strategy. ‘The politics of resentment against other people will not just leave us a fractured party. They will leave us a fractured nation.’

Although not unexpected, Rubio’s inability to carry his home state served as the final nail in the coffin of a campaign caught perennially on the cusp of breaking through, but falling under the weight of its own expectations. Rubio had, in recent weeks, suffered bruising losses in key primary contests that placed the senator well behind rivals Trump and Texas senator Ted Cruz.

‘I think he’s already an embarrassment,’ Rubio says of Trump. ‘People around the world are watching this debate and this campaign and wondering what’s happening here, because the things he says are nonsensical. When you’re the most powerful and important nation on earth, you’re not always going to be popular, but the question is, are you respected? And I don’t think Donald Trump is going to be respected.’

Florida marked the last stand not simply for the 44-year-old senator, but also for a party seeking a consensus alternative to Trump. It was a mantle Rubio himself embraced in the final weeks of his campaign, although in part to his detriment. A series of personal attacks Rubio made against Trump, while hardly the sole reason for his failure, helped propel the senator’s campaign into a downward spiral from which he never quite recovered. As Floridians took to the polls, Rubio expressed regret over his uncharacteristically lowbrow tone and acknowledged he had embarrassed his wife, children and the supporters who looked to him as a role model.