Why we can’t wait : Hillary Clinton landslide Victory in 2016 not only urgent; she’s vital (but not necessarily an US ‘slam dunk’).

Posted on January 3, 2016 by akiramorikawa 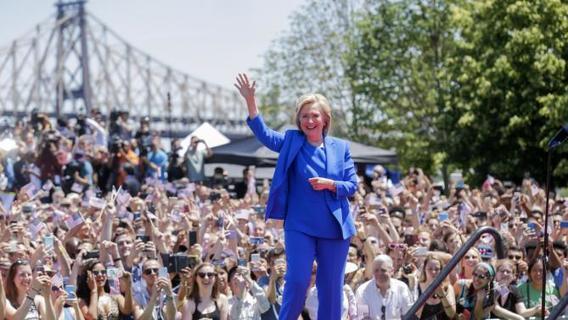 1. She’s Learned from the 2008 Election (and her numerous debates (and personal consultations and meetings) with Attorney Barack Obama).

2. The Republican Party is a Mess. A house that’s not divided surely cannot stand seems like the GOP’s mantra; making a circus that appears as if it’s a House of Cards about to fall under it’s own weight. And for all the talk of ‘unifying;’ they can’t seem to agree on anything.

3. Hillary Clinton appears to be the most Presidential.

4. In a World where equal access to opportunity and allocation of resources is prime; it’s time.

7. Although RoseGate, Monica LewinskyGate and the Suicide of Vince Foster, Benghazi, Libya , the Sub prime mortgage crisis, and the fiascos of her husband (Attorney) President Bill Clinton pepper and besiege her like dogs attacking a target; the liberal media and educational establishment continues to back her (and U.S. Senator Bernie Sanders, Diane Feinstein, Senator Harry Reid, Gavin Newsom, Jerry Brown and the usual suspects); perhaps making Hillary Clinton the most teflon (bulletproof) in the public’s watchful scrutiny (and court of public opinion) since Ronald Reagan (last I checked with The Ronald Reagan Presidential Foundation).

8. She Aligns Herself With Obama’s Current Policies. While the Republicans are determined that ‘anyone but Hillary’ gets in and a complete abrogation from and reversal of the Obama administration’s policies and procedures;  Obamacare is nothing if not a fulfillment of Hillary’s signature healthcare-reforms she’s been working on and with for decades. On the ecology, foreign-affairs, America’s standing in the World, Keynesian economics (stimulus-based and not involving a significant ‘across the board’ tax cut/cuts and/or reduction of corporate fees, fines and tariffs particularly for those who are already the wealthiest (10 to .8 to .2 % (not 2 percent. POINT TWO (or less) percent) of the population) and ‘hot-button’ issues such as a women’s right to choose, gay/lesbian/bisexual/transexual (G/L/B/T) and minority rights, Gun Control and law enforcement, and equal pay/parity; Clinton’s proposals and agenda dovetail/work with and not against precedent; the judicial, executive and legislative under The US Constitution and federal and state codes, statutes and rules. (cf. ‘Res judicata, Stare decisis’ i.e ‘it has already been written/done/decided; to ’stand by/for/with an adjudication’’)

Sourced through Scoop.it from: likelr.com